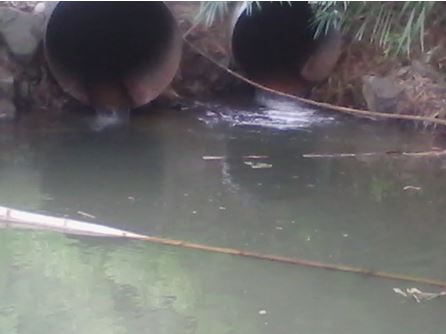 Residents of Brahabebome, a mining community in the Tarkwa area, are demanding their rights from Goldfields Ghana Limited after a protracted experience of terrible environmental disruptions. Buildings in the community have invariably developed extensive cracks due to regular blasts from active mining pits belonging to Goldfields. In April 2015, a rock flied from one of the company’s pits after a day’s blast and landed precisely at the heart of Brahabebome New Town. The stone was taken away by the company the following day without any pre-information or apology to residents.

Other worrying issues include dust pollution from the pits into the rooms of inhabitants after a day’s blast and heavy pollution of the community‘s only source of drinking water which is river Bediabewo. Chemical water from pits that is pumped out is channelled into the river. Now, the river is no longer habitable to crabs, lobsters, fishes and other life forms.  Also, the inhabitants in the community hardly enjoy proper sleep at night due to noise resulting from the operational activities of Goldfields Ghana limited.

The aggrieved landlords in their quest to fulfil all administrative requirements of the law before considering possible court action had earlier on petitioned the TarkwaNsuaem office of the Environmental Protection Agency for their intervention, but nothing was done by the agency in dealing with the situation.

In addition, the association has written a number of letters to Goldfields concerning their problems. Even though the company has given some responses to some of the issues, the group still believes the company is not using the right approach in dealing with them and that the company seems to be a little reluctant to tackle the more pressing issues raised by the community. For example, the association is of the view that they were not consulted when a team from Goldfields Ghana started investigations into the blasting issues they raised. The association is very concerned about the fact that, whilst the investigation on the impact of the blasting was on going, the company kept on with their blasting activities disregarding the call by the community to halt it. The pumping of the company’s waste water into the streams of the community and the dumping of the mine waste rocks close to the community were critical issues that the community expected the company to have treated with urgency but it seems to be hesitating.