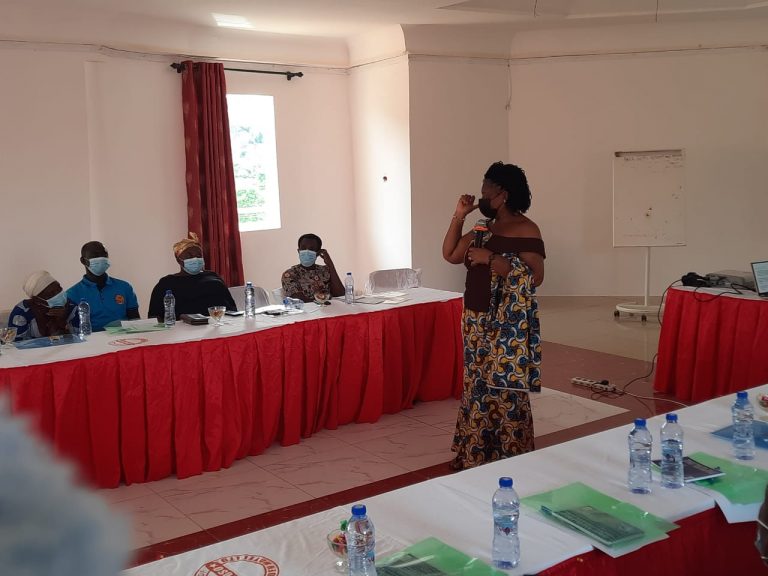 The participation of mining communities and the public in the Environmental Impact Assessment (EIA process), especially before any mining operation takes place, was very crucial, the Associate Executive Director of Wacam, Mrs. Hannah Owusu-Koranteng, has underscored.

She said such a move enables stakeholders, particularly mining communities, to know the intended project and its effects on them, allow for obtaining local and traditional knowledge for decision-making, and more importantly, facilitate alternatives to mitigate the impacts of the project.

Mrs. Owusu-Koranteng was speaking at the opening of a two-day training on human rights for communities affected by mining in the Central Region organised by Wacam in Bogoso of the Western Region on Thursday, April 21, 2022.

The workshop brought together about thirty-five (35) people from various communities affected by the operations of Perseus Mining Ghana Limited (PMGL) in the Upper Denkyira West of the Central Region. The communities were Breman, Akrofuom and Ayanfuri.

It was meant to, among other things, enhance the capacity of the communities, and to also help protect and safeguard their rights and properties.

Above all, the workshop was to bring about a well-structured community group with a common voice to effectively engage stakeholders to address right violations in their communities.

According to Mrs. Owusu-Koranteng, involving communities in the EIA process helps companies engaged in projects to address concerns of the people, adding that “such people want to be convinced or assured through the EIA that the project is not going to have impacts that cannot be corrected.”

She indicated that the EIA was a preventive, participatory and integrative environmental management tool with the ultimate aim of providing decision-makers the likely consequences of their actions on new projects and policies.

“The decision would indicate whether the project should be continued or stopped if it is found out that carrying on with the project would totally destroy the environment,” she said.

In Ghana, she pointed out that the EIA has been incorporated in the EPA Act 490 as an integrated Impact Assessment, explaining further that it means “the EIA should not look only at the physical environment but environment in its totality.”

Part of the law, she continued, grants the EPA the right to request a company or anybody undertaking a project to carry out an EIA and submit the report to the agency.

“The EIA process must provide clear indications as to how community life would be affected in situations of surface mining and how the company plans to restore the lives of such communities,” she added.

Furthermore, the Associate Executive Director of Wacam noted that an EIA should ensure that human rights of communities are not abused and trampled upon by especially mining companies.

She, however, said restricting participation to just sharing of information and consultation does not help the influence that community people would have on decisions.

In this regard, she pushed for participation to be moved higher to the decision-making and initiating actions.

Mrs. Owusu-Koranteng indicated that EIA has two objectives—long term and short term. She noted that while the short-term objective aims at identifying potential impacts that would affect the environment, the long term objective promotes sustainable development that would ensure that the health and safety of communities and workers are protected.

She described as worrying the development where communities in most cases are not given adequate technical information which could help them make informed decisions on mining investments.

This, she stressed, presented a challenge which if not addressed would defeat the objective and purpose of the EIA process.

Against that backdrop, she said the Free Prior and Informed Consent (FPIC) was an important principle that will make the EIA process an effective tool of the natural resource management.

The participants commended Wacam for the training, noting that it will build their capacities in mining issues and empower them to defend their rights and properties.

Mrs. Deborah Mensah, a participant from Breman, was full of praise for Wacam for organising the workshop. She indicated that the workshop has been an eye opener for her to learn a lot about mining.

“I have learned a lot from this workshop, and I will use the education acquired to effectively safeguard my rights and properties in the wake of the operations of Perseus Mining Ghana Limited,” she assured.

For his part, Mr. Moses Asomaining, a businessman in Ayanfuri, said: “I have now been made to understand that when it comes to compensation, it is a matter between me and the mining company.”

“…Additionally, I have also made to understand that even before a mining operation takes place, the mining company is supposed to first seek our consent through the principle of Free Prior and Informed Consent (FPIC),” he stated.

Reported By Williams Sarpong of the Environmental Guide.