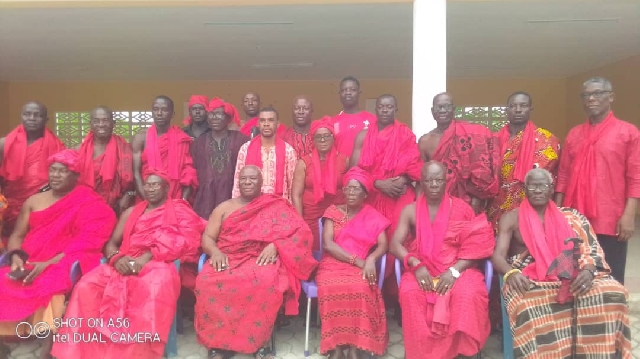 The Effutu Traditional Council has served a strong notice of caution to the government that it will not allow for any mining activity in the Muni-Pomadze Ramsar Site in Winneba.

Addressing a crowded press conference last at the Effutu Ekroful Community Centre near Ateitu, Winneba in the Central Region, the Paramount Chief of Effutu Traditional Area, Neenyi Ghartey VII, underscored that the Effutus attach so much importance to the Muni-Pomadze Ramsar site and will not trade it for any activity.

This, he explained, was because of the historical, cultural, environmental and economic ties Effutus have with the site.

"Our authorities will not do the right thing but what they want to hear is violence, when it is this calm, they refused to act accordingly," he stated.

Though he said they were law-abiding people and will not want the issue to degenerate and “get nasty," he affirmed that they do whatever it takes to protect their heritage.

The press conference was in reaction to recent media reports of an intended mining prospecting within the Muni-Pomadze Ramsar site by Green Metal Resources Limited.

Clad in red and flanked by chiefs within the Effutu Traditional Area, who were also in red, Neenyi Ghartey VII said it was worrying that the whole process by the government has been shrouded in secrecy, describing the company’s application as vicious, “hence its clandestine nature of publication.”

He said allowing mining in the Muni-Pomadze Ramsar site will have dire consequences for their environment.

“A mining operation established as applied for will clear the vegetation to pave way for rock blasting,” adding that “blasting of rocks will destroy the topography of the area,” he said.

He added that there will be no more wildlife because of loss of what to feed on, explaining that this will be as a result of the scare from rock blasting.

Rock blasting, he warned, will destroy the two streams—the Pratu and Ntakorfa—and the Muni Lagoon.

Other adverse impacts of any mining activity in the Muni-Pomadzi Ramsar site, he mentioned, would include the extinction of flora and fauna in the two streams and the lagoon; hunger among those whose livelihood is dependent on the lagoon; an end to the Ramsar site and Aboakyer Festival; increased poverty within the Muni-Raamsar Pomadze site, and; increased environmental degradation within the site.

Neenyi Ghartey VII said Ghana is a signatory to the Ramsar Convention which seeks to protect the site identified as a vital wetland.

“The Muni-Pomadze Ramsar site is protected under the Wetlands Management (Ramsar) Regulations 1999, LII659. It covers most parts of the coastal Winneba, the Pratu and Ntakorfa streams and the Muni Lagoon,” he affirmed.

According to him, migratory birds come to breed and also avoid the harsh weather in Europe, adding that fishes also come from the sea to spawn during the rainfall season.

“The brackish water is obtained from the two main streams and their bounds constitute the buffer area for flood control during heavy rains; they are therefore reserved areas protected under the LI. 1659,” he buttressed.

“So this is the environment that we have to promote tourism in addition to livelihoods in a community that has no other natural resources we like in the cocoa-growing areas with timber and so on,” he averred.

Ghana, he said, has five coastal wetlands—Sakumono, Keta, Densu, Songhor and Winneba. All these, he pointed out, have serious problems, albeit Sakumono, Densu and Songhor have been compromised, hence called for the need to protect the one in Winneba.

“It is on record, not once or twice but on several occasions we; and here I mean the Forestry Commission and the Effutu Paramountcy, have drawn attention to the Legislative Instrument establishing this area as a protected area, its purpose and what cannot be done within it, yet we continue to receive surprises from institutions like the Lands Commission and the Minerals Commission with proposed projects falling within this protected area,” he said.