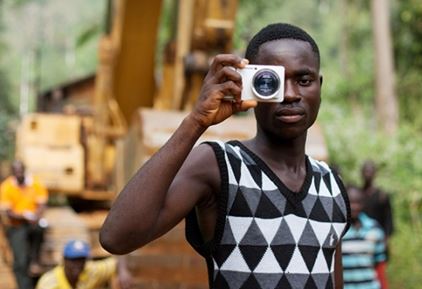 Affected community people within the Asutsifi North and Fanteakwa districts are using innovative waysto address rights violation concerns associated with mining operations within their districts. These two districts are hosts to Newmont Ghana Gold Limited, Kibi Goldfields and other illegal mining operationsand have not been spared the adverse impacts that most mining communities in the country are experiencing.

The two districts are bedevilled by a myriad of mining problems. They include pollution of water bodies, unlawful destruction of farmlands and property and unlawful arrest and detention of community members who rightfully voice out their disapproval ofthese violations. One other issue isinadequate consultation of host communities before and during the various stages of mining activities.

Asidethisgross disregard of rights and inhumane acts meted out to affected community people, they werealso facing the challenge of not having access to simple grievance sharing mechanisms where they can report violations of community rights or other irregularities. In instances where these violations are reported, they are mostly met with delayed or no response from the regulatory bodies and the mining companies.

In respect of these setbacks,Wacam, ACEP and the affected communities, with support from IBIS, have adopted the use of camera gadgets in capturing and gathering evidence on the problems the mining activities are grappling with. Agroup of volunteers from affected communities within the two districts known as Minewatchers have been providedwith camerasthat haveAndroid systems whichallow them to directly report violation of rights to the national and global level through social media and a website that has been specificallydeveloped to receive such reports.

The reportsare formattedin a simple text describing the incident and this iscomplemented with photos and short videos demonstrating the violation of rights.For reports to be authenticated, the cameras are equipped with GPS coordinate functions called geotagging which makes it easierthe particular location that aphoto or video was captured to be verified. TheMinewatchers have been trained on how to use smart phones and digital cameras, documentation of violation of rights, Ghana’s legal mining framework and community rights.

It is envisaged that, when armed with technology, community members in these two districtswill have a more direct and informal access to report grievances, complaints and concerns when human rights are violated.Alsoadvocacy campaigns will be built around reported cases right from the communities through to the national and global level to support these affected communities for their challenges to be addressed.This  will also greatly augment efforts already in place in exposing and holding mining companiesas well regulatory bodies accountable for the adverse impacts of mining operations on host communities.

Innovative application of ICT holds the potential to establish efficient ways of disseminating information, mobilizing people and communicating interactively between different groups. These new ICT opportunities can be used to not only instantly  report violation of rights , but they will also be very helpful insensitising civil society, students,the media and other stakeholders to serve as watchdogs so as to eradicate violations of rights and increase support for advocacy work onresponsible mining to the benefit of affected people.