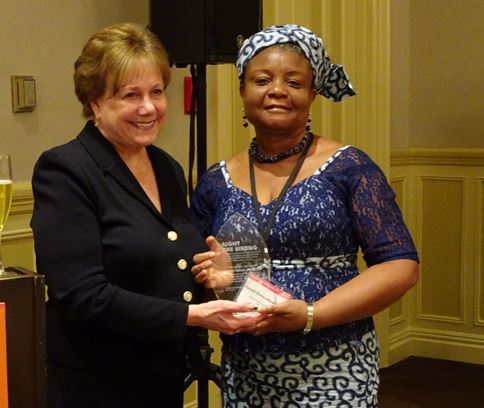 The Associate Executive Director of Wacam, Mrs Hannah Owusu-Koranteng has received the “Right the Wrong” Award from Oxfam America for promoting the leadership of women in communities affected by mining in Ghana, mentoring new female leaders and being a voice for rural people.

The award ceremony took place on 7th March 2015 in Boston, USA as part of the celebration of the International women’s day.  Ms Ann M. Veneman, former Executive Director of the United Nations Children’s Fund( UNICEF) and former U.S. Secretary of Agriculture  who presented the award to her paid glowing tribute to the continued commitment of Hannah Owusu-Koranteng(Mrs) in empowering ordinary women to speak out against injustice. The citation of the award described Hannah Owusu-Koranteng (Mrs) as a woman who had made extraordinary efforts in fighting injustice and creating lasting change for people living in poverty.

female activist of Wacam, Ms Joana Akosua Manu who has championed the struggles of her Community in Dumase against the violations of the economic, social, environmental and political rights of indigenous host communities by mining companies  also received the “ Right the Wrong” award. Ms Joana Manu, an Assembly woman for Dumase Electoral area, has been empowered to act against injustice of multinational mining companies through the rights education programme of Wacam. She was unable to travel to US to receive the award because her visa application was turned down. Her award was received on her behalf by Hannah Owusu-Koranteng (Mrs).

Hannah Owusu-Koranteng (Mrs) thanked Oxfam America for honouring her and Ms Joana Akosua Manu. She dedicated the award to women who are fighting injustice in all corners of the world especially women living in mining communities who are fighting against corporate greed which deprives women of their dignity.

Mrs Hannah Owusu-Koranteng had extensive discussions with advocacy and lobby groups in the US such as “Sisters of the Planet Ambassadors” which is a network of 300 influential women from across the US who are American government officials, business, and faith and community leaders united by a commitment to women’s empowerment.  She made a presentation on how activities of multinational mining companies destroy the livelihoods of host communities and deprive indigenous people of access to resources at the Hunger Banquet that was held in Boston, USA for about 300 people of diverse backgrounds to draw attention to global inequalities which had resulted from bad governance and policies.