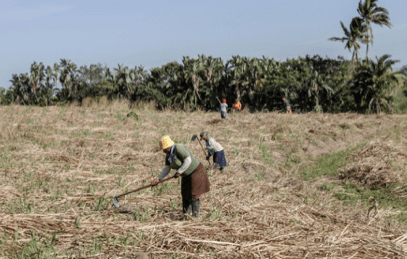 Residents of Nkoranza North and South in the Bono East Region have reaffirmed their affection for agricultural activities as opposed to potential gold mining, and drilling of oil and gas in the area, indicating that farming is more sustainable.

For over a decade, there have been many attempts by mining companies to prospect for gold in the Nkoranza area as well as oil and gas exploration activities by the Ghana National Petroleum Corporation (GNPC) under its Voltaian Basin, North, and South projects.

That notwithstanding, the local people have vehemently stated that they would prefer to stick to farming activities rather than give out their farmlands for mining, and oil and gas projects, stressing that they would resist any attempt by authorities to lease out Nkoranza lands for the mining and oil projects.

It will be recalled that about 10 years ago, residents of Donkro-Nkwanta, a farming community in the Nkoranza South Municipality resisted an attempt by the then Newmont Ghana Gold Limited to undertake gold exploration, justifying the action as a means to protect their farmlands.

The Nkoranza enclave has vast arable land for the cultivation of different crops, making farming the major economic activity and the leading employer within that part of the country. Farmers in that area are noted for the production of maize, yam, rice, cowpea, cashew, watermelon, groundnut, and vegetables among others with their two seasons-major and minor seasons.

In an interview with journalists, Kwame Noah, Youth Chairman of Donkro-Nkwanta-a farming community urged the government to step up efforts to modernize agriculture, especially with mechanization and value-addition to make it more profitable and attractive to the youth. He also appealed for the upgrading of deplorable road network linking the communities to aid farmers to cart foodstuff to market centres.

He is of the firm belief that agriculture remains the only economic activity that holds the potential to transform the lives of the rural folk in Donkro-Nkwanta and surrounding thirty- eight farming villages. Some of the communities include Salamkrom, Kyekyewere, Akrugua, Mehame, Atimetim, Asuano, and Abuaso.

“If anybody wishes to change our fortunes, then it must be through an agricultural transformation but nothing else. Since time immemorial, farming has been the mainstay of the people here. Besides, farming is not rocket science, and that the chunk of the population who are illiterates easily relates to it to make a living. We don’t have the expertise to work in mining, and oil and gas industries,” he said.

“Although mining and oil and gas generate revenue for the government we have also seen the level of deprivation, unemployment, social vices, and many other devastating problems in mining communities. The unpleasant stories in communities like Obuasi, Tarkwa, Prestia, Kenyasi, and Ayanfuri do not inspire us to a fellow that tangent,” he added.

Mr. Dominic Kwaku Asante, Assemblyman for Busunya-New Town in the Nkoranza North District on his part said the failure of prospecting mining companies and GNPC to seek the blessings of stakeholders like farmers, traditional authorities, youth groups, and Assembly members give them a clue of what to happen in the future should they give the companies green light to operate.