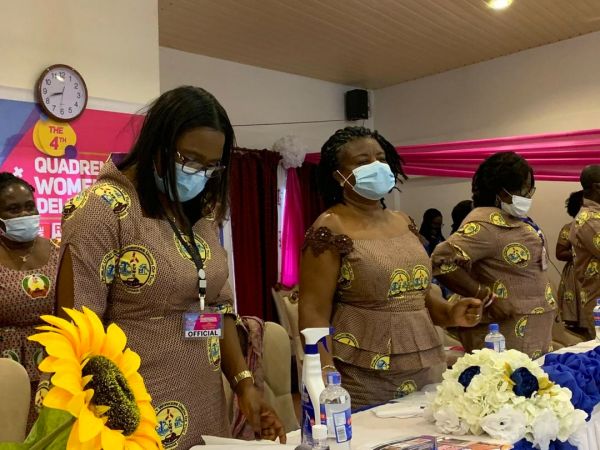 The Chairperson of the National Women’s Committee of the Union of Informal Workers Associations (UNIWA), Mrs Hannah Owusu Koranteng has advised trade unions in the country to come together to fight the exploitation of workers by multinational businesses.

She said the unions can achieve this by sending a clear message that Ghanaian workers cannot be taken for granted.

Delivering the keynote address at 4th Quadrennial National Women’s Committee Delegates’ Conference at the PUWU Hospitality Centre in Kasoa on the theme, “Repositioning the union in the face of emerging challenges in the world of work”, Mrs Owusu said a united front will ensure that employees are treated well across the board.

She reiterated that trade unions must fully understand that Ghanaian workers cannot be taken for granted and must, therefore, be treated well in terms of remuneration and conditions of service by all organisations that employ the services of such workers.

She said due to globalization, multinational companies are bound to move into various countries and they are equally welcome to Ghana.

The women’s Chairperson for UNIWA said one of the reasons why most multinational organisations are moving to Ghana to set up is because of the availability of raw materials and cheap human resource.

“It is important to know that as a group of people with common interests, you only attain what is rightly yours if you are organised. So as workers, if global capitalists are organising to move down to exploit our resources, then it behoves us to also organise and develop strategies that will ensure that we counteract that prevailing force”, she said.

Mrs Owusu Koranteng also urged the unions not to disregard the role women and the youth play in such instances. She explained that by their nature women are crowd pullers who bring people together to fight a common enemy.

“In organising as workers, we should not lose sight of the fact that women have a major role to play. Women are natural multi-players and if equipped with the needed skills, that will be the rallying point to create awareness about our displeasure with exploitation by these foreign companies”, she stated.

Meanwhile, The National Women’s Committee of the Public Utility Workers’ Union of the Trades Union Congress, has elected 10 new executives to steer the affairs of the Committee for the next four years.

The elections were held at the 4th Quadrennial National Women’s Committee Delegates’ Conference at Kasoa on Wednesday, June 8, 2020.

The newly-elected Chairperson, Margaret Hammond thanked the delegates for their overwhelming endorsement and promised to work efficiently with her executives to address all concerns of the women of the Union.
“I want to say thank you to everyone here, the leadership of the National Secretariat and the immediate past chairperson and her team”.

“Our doors are always open and we are ready for criticisms as long as they are constructive. As your leaders, we are ready to serve you because leaders must be servants”, she added