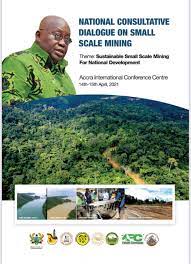 The Associate Executive Director of Wacam, Mrs. Hannah Owusu-Koranteng, has cautioned politicians and Ghanaian mining communities over the politicisation of the campaigns and fight against illegal mining (galamsey).

She said the partisanship positions taken by politicians especially political parties in their bid to win political power might collapse the country Ghana.

She described politicians undermining the campaigns and fight against illegal mining (galamsey) as nation wreckers and saboteurs who do not have the interest of the nation at heart.

“If for the sake of votes some politicians would go to mining communities and galamsey sites to insight them against national policies against illegal mining you are a nation wrecker and the nation will collapse on the head of such politicians,” Mrs Owusu-Koranteng emphasised.

Madam Hannah, an environmentalist and human rights activist, noted that such politicians only take advantage of the communities for their selfish partisan interest.

In the past the NGO and its allied institutions presented a sample (draft) policy document on sustainable mining and minerals to the government nothing came out of it.

He said several meetings on the document were held with state agencies including the Minerals Commission of Ghana these did not yield any positive result.

On the ongoing national consultative dialogue on illegal mining (galamsey), Mrs Owusu Koranteng urged the state to go beyond dialogue and implement recommendations of the meeting.

She said the involvement and sensitisation of mining communities, small scale miners, citizens and chiefs on the negative impact of illegal mining on the environment, farming, agriculture and their livelihood would enable the campaign to succeed.