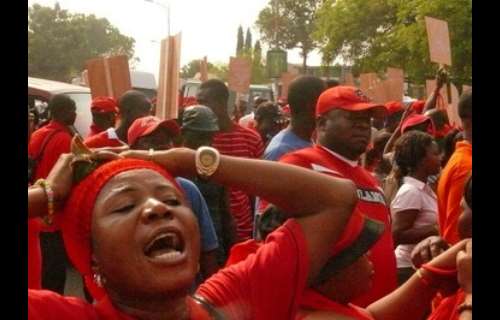 The leadership of the Coalition of Concerned Youth of the five communities affected by mining in the Newmont Ahafo Mines Area have accused Newmont Ghana Gold Limited of failing to fully implement the 10 recommendations of the seven (7)-member committee set up to investigate the petition of the association against the company in 2017.

It would be recalled that in 2017, the leadership of the Coalition of Concerned Youth in five communities affected by mining petitioned the then Brong-Ahafo Regional Minister, Kwaku Asomah Cheremeh about challenges facing the communities due to the mining activities of Newmont Ghana Gold Limited.

According to the petitioners, social, economic and environmental consequences of the surface mining of Newmont Ahafo mine have worsened the living conditions of the people.

The petitioners categorically called for the upgrading of the Kenyasi Health Centre to a well-equipped District Hospital by the company as a matter of urgency to ensure that people have access to quality and efficient health care delivery.

According to them, the upgrading of the facility was one of the main needs of the communities to have a district hospital during needs assessment by the company.

The aggrieved community youth were also of the view that upgrading of the facility will help handle the mining-related diseases as well as saving lives of many, especially pregnant women, children and hypertensive patients who may get shocked from the excessive noise from the company’s blasting.

They further argued that the operations of Newmont have resulted in an influx of people to the area and this has brought a lot of pressure on the health centre.

The Committee in a 17-point recommendation to the Minister asked Newmont Ghana Gold Limited to collaborate with the Asutifi North District Assembly to upgrade the Kenyasi Health Centre into a District Hospital by 31st December 2018 which was one of the key demands of the petitioners.

The Committee further recommended that Newmont should independently undertake the construction of what they termed ‘legacy projects’ including the Rehabilitation of Town Roads of the major towns in its catchment area.

Again, Newmont should take the necessary steps to train locals as soon as possible to take advantage of the employment opportunities that will arise from underground mining.

The recommendation further asked the mining giant to fully implement provisions in its Ahafo Social Responsibility Agreements regarding employment with copies of relevant reports submitted to the Brong-Ahafo Regional Coordinating Council and the other stakeholders by 31st December 2018.

In regards to the Environmental/Social Participatory Monitoring Management Plan as enshrined in the Relationship Agreement between the Ahafo Mine Community and the company, the Committee recommended that the company should ensure its full implementation without any further delay, adding that the Monitoring Team should be reconstituted to conform to the Relationship Agreement.

However, the leadership of the Association have alleged that Newmont is yet to fully implement the 10 recommendations especially the upgrading of the Kenyasi Health Centre into a full District Hospital as the deadline in the recommendation has passed more than two years ago.

According to the Acting Chairman of the Association, Adusa Yakubu, the Kenyasi Health Centre as of December last year has not been upgraded into a District Hospital status.

However, our checks have revealed that in April 2019, Newmont cut sod for the construction of a GHS1.9M doctors’ residence and children’s ward for the proposed Kenyasi Health Center as part of broader efforts to upgrade the Health Center into a District Hospital.

On the legacy projects, our checks also revealed that the Company in October 2019 cut sod for the construction of the 4-Kilometer town roads at Ntotroso, Gyedu, Wamahinso, Kenyase 1 and Kenyasi 2 at the cost of GHS4.3M.

However, our visit to the towns has shown that the company currently has so far only tired a kilometre of town road each, at Kenyasi Number 1 and Kenyasi number 2.

On the part of the Asutifi North District Assembly, the committee urged the Assembly to set up a scholarship scheme to support indigenes who may be interested in pursuing courses in the mining sector to enable them to take advantage of the local opportunities.

The further recommended that the Assembly should by the end of the 1 st Quarter of 2018 constitute an independent technical body to investigate the link, if any, between the blasting activities of NGGL and the cracks developed in buildings in the affected areas

Newmont should set up a scholarship scheme to support indigenes in the affected areas who may be interested in pursuing courses in the mining sector. The Acting chairman noted that the Association has not received any report from the Assembly to set up the scholarship scheme to support indigenes and the number of students who have benefited from the scheme so far.

According to him, compensations that were paid were not in line with Sections 73 and 74 of the Minerals and Mining Act, 703, Act 2006.