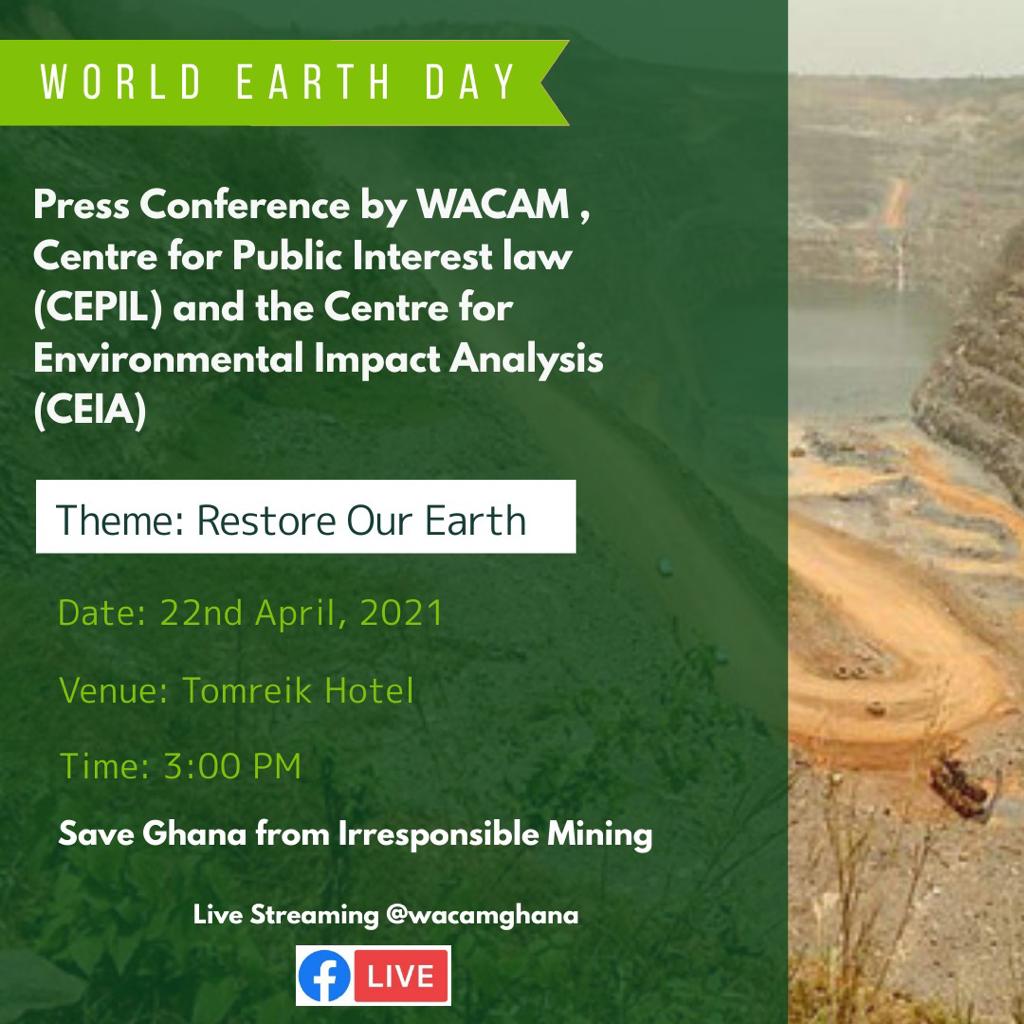 The earth plays multiple roles of supporting human life, being the habitat for plants and animal species, providing clean air to sustain life forms, playing host to forests which cover 31% of total land area and supporting 80% of biodiversity. The standing forest has contributed to Climate Change Mitigation, regulates water quality, provides livelihoods to millions of indigenous people, and is a store of biodiversity.

Human activities such as mining and other polluting industries, commercial agriculture among others have depleted the important resources of the earth. Environmental issues such as clean air, clean water, depleting forests, and endangered species among others have become topical issues that need collective actions to address.

The Earth is what we all have in common. The destruction of the earth from human activities prompted the celebration of the World Earth Day on 22nd April 1970 to demonstrate global support for environmental protection. The day was instituted to also give a voice to citizens of nations to speak out against activities that have contributed to uncontrolled pollution which threaten our very survival as human beings and the destruction of ecosystems. The global celebration of the World Earth Day gives us the opportunity to reflect on our actions and how to develop strategies to halt the destruction of our global heritage.

It is a day when we pause to think about the environment. It is an undisputed fact that the dramatic upsurge of the activities of polluting companies and human greed have justified the need for reflecting on the environmental cost of business decisions. The statement by Mahatma Ghandhi that, “the Earth provides enough to satisfy everyman’s need, but not every man’s greed” should guide our actions in pursuit of profit at the expense of the environment.

The theme for the celebration of the World Earth Day 2021 is “Restore our Earth” which is very appropriate and timely. The World Earth Day is being celebrated at a time when Ghana is struggling to find solutions to the countless social, economic and environmental problems associated with increased irresponsible surface mining operations. Even as we try to grapple with the pollution of our waterbodies and the destruction of the environment associated with mining, the business argument of profiting from mining ventures negates the importance of protecting the environment. This has translated in Ghana experiencing a decline of biological resources. It is estimated that the total forest cover of the country has reduced from 88,000 km2 in 1938 to about 15,800 km2 to 17,200 km2. The reduction in forest cover has resulted in habitat loss which is important for the maintenance and protection of biological diversity.

Mining in forest reserves contravenes certain provisions in the National Land Policy developed by the Ministry of Mines, Lands and Natural Resources in 1999. Section 4.5(a) of the National Land Policy states that,“To ensure the conservation of environmental quality, no land with primary forest cover will be cleared for the purpose of establishing a forest or tree crop plantation or mining activity”.

The National Land Policy of 1999 states further in Section 4.4(b) that,

The state in the past granted mining rights to companies like AngloGold, Newmont and SAVACEM to mine in protected forests of Kubi, Adjenua Bepo and Yokumbra Forest Reserves respectively. Government has also granted mining exploration right to Azuma mining company to explore for gold near the Mole National Park.

At a recent National Consultative Dialogue on small scale mining held at the Accra International Conference Centre on 14th and 15th April 2021, H.E. Nana Addo Dankwa Akufo-Addo stated among other things that,

“Mining becomes a danger to the society when, after extracting the gold, diamond, or other stones and minerals, the land is degraded and poisoned with toxic materials”.

Based on the stated commitment of the President of the Republic of Ghana to pursue environmental justice, we call on government to halt attempts to de-gazette portions of Globally Significant Biodiversity Areas (GSBA) in the Western Region in particular and other areas for logging.

We commend government for stating a commitment to stop the granting of entry permit for mining in forest reserves.

We are of the firm belief that if government halts the policy contradiction of granting permits for mining operations in forest reserves, it will mark the beginning of restoring the integrity of our forests. As we celebrate the World Earth Day, we wish to state our unhappiness about the continuous mining activities in our forest reserves.

Again we wish to call on the government to place a moratorium on the granting of mining leases and permits for all surface mining operations in Ghana as we engage in cost-benefit analysis which takes into consideration the social, economic, cultural and environmental costs of mining.

It is our view that affected mining communities must be empowered under the international best practice of Free Prior and Informed Consent (FPIC) which grants the power to community people to determine their economic and livelihood choices as against imposition of mining. We call on government to initiate the process of making Free Prior and Informed Consent (FPIC) part of our domestic laws.

In the spirit of the theme for the celebration of the 2021 World Earth Day, which is “Restore our Earth”, our call for actions and policies for responsible mining should be seen as part of the global effort to Restore Our Earth.

We thank you for your attention.